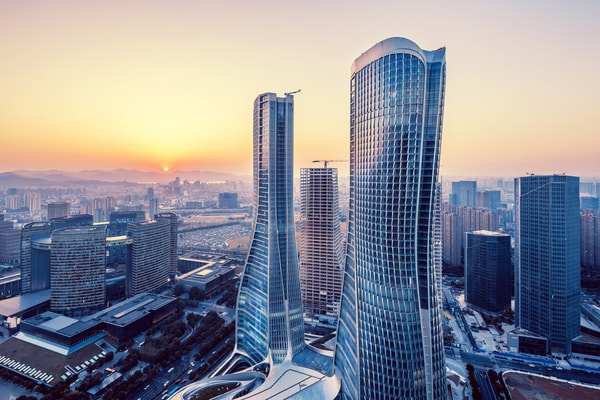 Hangzhou is the capital of the Zhejiang Province and its local cultural political center. Eulogized by poets and applauded by emperors, the West Lake has a good name as a tourist attraction. Being the southern terminus of the Grand Canal, the city of Hangzhou lies in the Yangtze River Delta and borders on the east with Hangzhou Bay. Within the city is located the West Lake, which was named a World Heritage Site in 2011. The Qiantang River divides the city into north and south, with the north being the largest population.

Hangzhou, a city that currently has nine million inhabitants, represents the rise of a new economy, based on technology and software, which contrasts with a national slowdown. Based on venture capital funds invested in large data management companies, hundreds of new companies linked to technology have opened in Hangzhou, capital of Zhejiang province, to relieve the withered industrial sector.

The all year-round subtropical monsoon climate contributes to the different seasonal sceneries, making the city one of China’s most popular expat destinations. The west lake is beyond doubt the foremost landmark noted for the scenic splendour that blends naturally with several notable historical and natural attraction sites. From the lake, visitors may enjoy the wonderful panoramic view of the city’s highlights.

Hangzhou is one amongst the best places to dine in China and its native culinary art offers dishes that consist mainly of pork and seafood instead of the meat and lamb dishes that are generally found in the north and west regions of China. One of the specialties in this city is the dongpo rou, a particularly fatty chunk of pork in a very syrupy sauce, and cuyu, a local sauce made of fish and vinegar. If you don’t like Hangzhou’s cuisine, you’ll find many excellent Szechwan, Shanxi, and Xinjiang restaurants throughout the city.

When you take a stroll along the sights of this city, you will understand why it’s called the “Heaven on Earth”, a visit is highly recommended. The city offers plenty of cultural opportunities such as temples and its beautiful kept gardens and forests. With airports at Shanghai (Pudong International Airport) and Hangzhou, traveling should not be a problem, with frequent domestic and international flights every day.

Shangcheng, within the heart of downtown Hangzhou, is known as a site of both nice scenic beauty and bustling commerce. This district features a number of Hangzhou’s most stunning places, West Lake and Wu Mountain are here. But Shengcheng is additionally a vital part of Hangzhou’s campaign to be a city of quality of life and has therefore committed itself to developing innovative business, finance, travel, business and property sectors.

In this district, there a lot of great restaurants with options for every type of person. Besides, Xiacheng is popular among expats because when the sun goes down, you can have a really good experience in the bars of this area with locals or friends.

Gongshu district stays true to the principles of planning, development of contiguous areas, pushing forward as a whole and speeding up the renovation of urban villages. Also, this district issued Education Revitalization Initiatives to speed up the construction of standardized school campuses, making this area great for expats with kids. Some beautiful places in this area include ZhanYanGuan old site, the old site of Tongyi Silk Factory, Gongshu Canal Historic Street and Fuyi Barn.